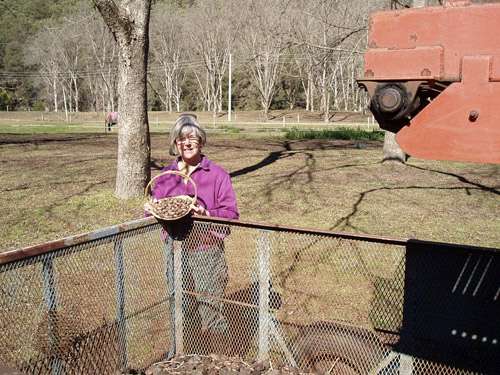 Jane Blacker farms and manages one of Australia’s largest organic Pecan nut farms. Right here in our valley.  Although a petite women in stature, Jane is certainly not small by nature or in what she has set up and achieved. Jane and her husband Warwick have established a commercially viable farm, a major achievement by farming standards and an enduring contribution to agriculture and society. Her story is an encouragement to any women wanting to pursue farming.

Jane was born in Harrow, Middlesex, England. Her childhood was spent on a small farm in Chelmsford, Essex. Ever since childhood, Jane always wanted to be a farmer. Her inspiration for farming and gardening came from her mother and the family gardener, Clement Sewell. She has fond memories of being in the garden with her mother, who was, she says, “the most amazing gardener”. They grew currants, berries, apples and daffodils for market. They also had poultry, ducks, geese and chickens, providing eggs and other produce for sale.  Jane observed her mother and the gardener Clement closely and absorbed a great deal in these early years. 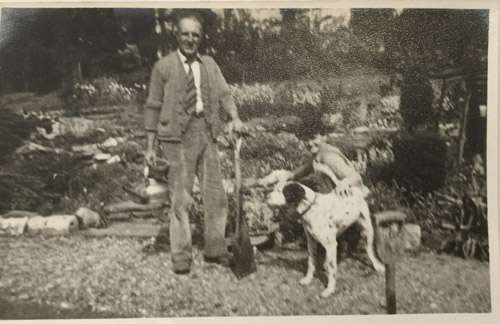 Jane and Clement in the garden with the family dalmation

Despite Jane’s desire to be a farmer in adolescence she studied a cookery and nutrition course and was then employed as a management trainee at John Lewis Department Store in Oxford St London. She saved her pennies and in 1968 migrated to Melbourne. “I was a ten pound migrant,” she says. She shared a house with other girls until she met and married Warwick. They spent a few more years in Melbourne after the birth of there first son they moved to Adelaide, then Perth and back to Melbourne before moving to Sydney where Jane completed Horticultural and Bush regeneration courses at Ryde Horticultural College of TAFE, one of her teachers being Angus Stuart from Gardening Australia. She then settled in St Albans.

In 1997 Jane’s life desire to be a farmer came to fruition. Jane and Warwick purchased the farm.  Jane managed the farm while Warwick continued his career in the Aviation and Tourism industry. The 75-acre farm in Upper Macdonald, St Albans, is a significant property on the banks of the Macdonald River. At the time, the farm was not just the largest pecan nut farm in Australia but the only certified organic pecan nut farm in Australia, making Jane and Warwick pioneers in the industry.  As Jane explains, this was at a time when organic was seen as alternative and trendy.

Since 1997, Jane has worked hard to build and expand the business – purchasing farm equipment and machinery; managing the property; developing a customer base; as well as being involved in the whole cycle of nut farming – growing, harvesting, sorting and processing, marketing and distributing nuts commercially. The farm went from being hand operated to automated in a short period of time. 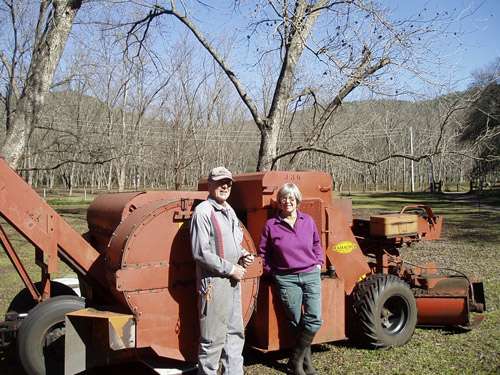 Jane and Warwick harvesting nuts on the farm.

There are 1250 trees in total with 10 different varieties organized into two different orchards. The orchards occupy 60 acres. Jane also runs Black Angus pure bred cows, which are moved through each of the paddocks. She likes this breed because she says they are good meat, easy to handle and make good mothers.

The Pecan farm would have to be one of the most picturesque farms going. The tall majestic trees with long slender intricate branches form arches over avenues that look sensational.  Under the trees the grass forms a green carpet on which the nuts fall and are easily harvested without interference. Jane runs her Angus cows under the trees from September to March to keep the grass down and fertilise the trees.

Jane prides herself on producing quality nuts. “Quality of produce is top priority” she insists, “ and if it’s not it will come back to bite you. Your reputation depends on this.” The nuts thus need to be clean, dried and stored well and to go through strict quality control inspections. 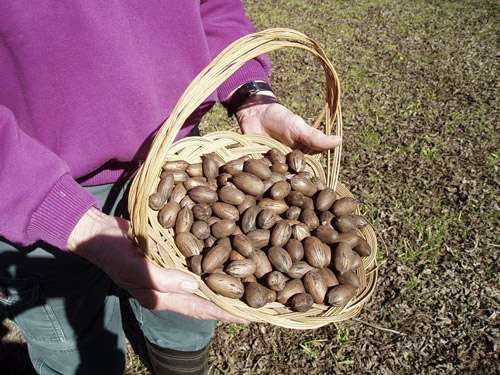 Jane’s nuts are regarded as the best quality in the Valley.

Pecans are a long-lived perennial species. They may live well over 100 years. Once established they are hardy trees with few pest and disease issues. The longicorn beetle might burrow into the bark of the tree trunk but the tree is hardy enough to cope with it. Apart form the nuts as a nutritious food source, pecan trees provide a range of other functions and reasons for growing. The wood is a hickory so is good for smoking foods. It makes a nice light colored softwood timber for indoor furniture and the leaves make great garden mulch. They are a very beautiful specimen tree and being deciduous provide shade in summer and sun in winter shade, and so can assist in passive solar effects in landscaping. They would make an ideal street tree planting in the right place comparable to the oak trees so famous in the streets of Canberra. The nuts are nutritious and delicious. They are also versatile, able to be used in salads, roasts, stir-fries, deserts and other ways. They are fairly soft shelled and easy to crack – and did I say they taste great! 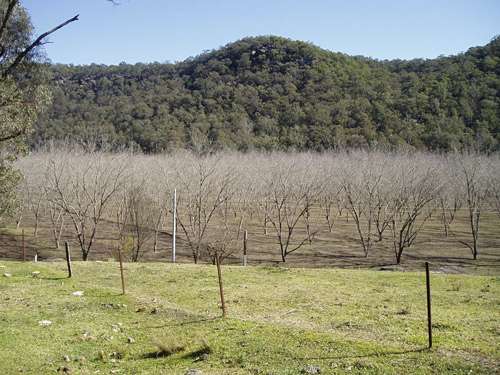 The farm in winter is as majestic as summer

Birds are the biggest issues of farming pecans. The cockatoos are relentless. She recalls cockatoo numbers as small as around one hundred birds in the early years and how these numbers have built up to over a thousand today. To control them Jane and Warwick use a gas gun that scares the birds. It’s not a total solution by any means and they still lose many of their nuts. The other issue confronting Jane and any farmer is drought and climate change. “It’s hard to realize your dream in drought” Jane says, and her wish to the government is to provide early assistance not when it’s too late and people have given up.

Jane also has some tips and considerations for anyone wanting to take up farming.

“When times are good, the farming lifestyle is extremely rewarding. Working outdoors, with nature, the fresh air and freedom is magic. Best of all is the camaraderie and friendships in farming communities – the help and caring of people in the country. I have no regrets, I always knew what I wanted to be and I wouldn’t have missed this community for quids!” 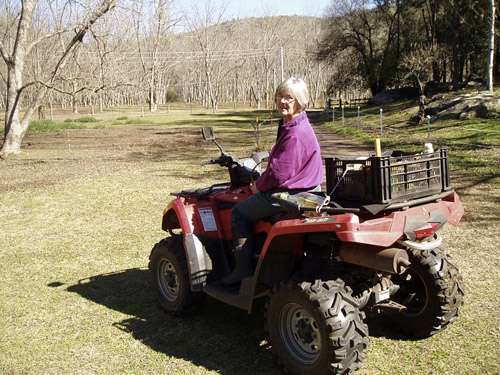