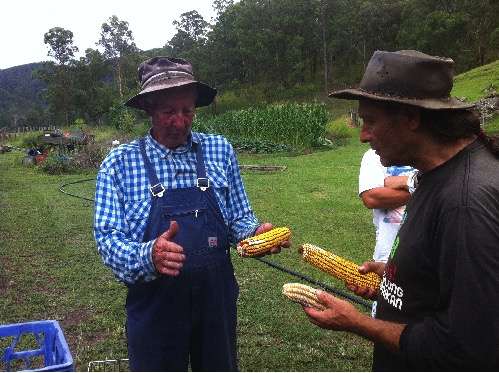 Each month, we will profile the wonderful Farmers of our Valley as a way to inform and honor what they contribute. Over the year, I think you will be surprised about who is growing produce, how much is being produced and how it’s being produced. New, young farmers will be profiled and, of course, so will some of their tips. We commence the series with a tribute to one of the valley’s greatest, Ninian Sternbeck.

A tribute to the late Ninian Sternbeck. 4th generation farmer of our beautiful Macdonald Valley and town of St Albans. January 1935 – December 2018

Ninian Sternbeck was at home on the land. A salt-of-the-earth kind of guy, who lived his whole life on the land farming. In the beginning, he told me he used to plow by horse and he believed quite firmly it to be more efficient and effective than today’s methods.  “Today”, he said, “these young blokes don’t know how easy they have it, but even with all the machines”, he continued, “the old horse and plow never broke down, never needed fuel and was cheaper, quicker and better than a tractor”.

Ninian grew food all his life. He had to­, to survive out here – putting food on the table, making a living and feeding his animals. He loved the land and everything about it. It was part of him, molded him, gave him resilience, endurance and great physical and psychological strength.  Over his lifetime, he must have grown just about every vegetable. And more recently he grew pumpkins, squash, potatoes, melons, corn, tomatoes, beans and much more. Nin took his veggies to St Albans every Sunday where he sold them with other items for some cash. He was particularly proud of his corn. An heirloom variety, he told me, grown by his forefathers. He lived a very basic life, without mod cons – a very environmentally sustainable existence.

As an analogy, Nin was like a giant tree of the forest that has fallen and left a huge void for our new young farmers of the valley to fill. Luckily some of his seeds, his wisdoms, his knowledge and his skills live through them and will remain in the valley through those close to him and those who listened.