International Permaculture Day and its history

International Permaculture Day is an event and history very close to my heart. It’s close because I was instrumental in developing it. From 2000 to 2013. For those of you interested in its roots and development I have my story.

It all started back in 2000 when the idea was first surfaced at a National Permaculture Conference APC 8 in Melbourne. The concept was to highlight and promote Permaculture whereby our collective effort was an integrated approach to focus on one day for maximum exposure.

Permaculture Melbourne had a group look at the day but ran into problems with insurance and the logistics of human energy to put it on. It was a bee however, that stuck in my bonnet and after discussing it with my permaculture group Permaculture Sydney North I decided to put it on the agenda for the next National Permaculture Conference APC9 in Sydney March 2008. It was discussed here hoping for some possible decisions but again no clear consensus was reached with much of the discussion focused and divided as to when to hold it, May Day or the equinox in September. 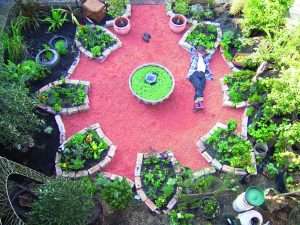 As president of Permaculture Sydney North at the time I was really keen to take the ball and make this happen. The membership of PSN also strongly supported it so the committee decided to start the ball rolling by trialing it locally. That same year in May harnessing the capacity of PSN’s large membership we put on several events throughout our bioregion. It was an overwhelming success with 100’s of people attending a variety of events. We opened our homes and gardens or ran events to celebrate permaculture and promote it to the public. In those days there were not too many permaculture gardens in Sydney let alone our Bioregion, just my own and a handful of others, mainly permaculture students of mine from TAFE. Nethertheless, the day was successful and attracted hundreds through our local gardens. Looking back I can convincingly say that this day alone was a catalyst for developing permaculture gardens but also speeding up the progress of gardens.

In the mean time as President I had developed a broader Sydney bioregional committee to help develop next years event. Presidents and reps from Permaculture West and South embraced the day and spread it into their own regions of Sydney.

Permaculture Sydney (which comprised of Permaculture North, South and West regional groups and all their respective local groups) decided to run a Permaculture Action Day in May 2010 and harnessed the capacity of an even larger membership base to put on over 20 events throughout Sydney. It was an overwhelming success attracting over 1,000 people to a variety of events including Permablitzes, workshops, films, demonstrations, talks and many open home garden tours.

Following this came inquiries from neighbouring Permaculture Groups to create a larger event for 2011. Permaculture Sydney invited all to join in and make this a truly National Permaculture Day. That year groups in Cairns, Blue Mountains, Noosa, Hunter, Southern Highlands, Central Coast, Bega and more joined the party.

Its aims were established. National Permaculture Day was a day to promote and celebrate Permaculture. It’s a day whereby our collective effort is consolidated, providing maximum focus on Permaculture across Australia.

The day was to bring the multiple benefits of:

It was obvious the day provided multiple benefits and was growing rapidly so for 2011 we wanted to make it “officially national” and launch it properly. To do this though we needed funding and a managing body. Permaculture Sydney North agreed to apply for funding and to auspice and manage the project in association with Permaculture Sydney.

Permaculture North was successful in obtaining funding. That year the voluntary work continued but with a grant of $19,715 for the day, from the Commonwealth Govt Department of Agriculture Fisheries and Forestry. The “Community Action Grant” was to promote sustainable agriculture in both urban and rural environments, conserving bio-diversity and the environment. The grant was to be used to officially launch the concept and develop the day on a National scale. This involved auspicing and overall management of the grant. Obtaining this grant in and of itself was a big achievement.

The funding grant took National Permaculture Day and dare I say, the movement, to another level, the national level. It enabled us to launch and promote it nationally, develop resources from scratch, employ a professional graphic designer and cover administration costs. It very much contributed to its success. This national project has been well and truly launched into the hearts and minds of permies across Australia and the mainstream.

And successful it was. Thousands turned up to NPD events in every State across Australia with perhaps the exception of NT. All events were well attended with large crowds of enthusiastic people wanting to learn about Permaculture. Sydney got record crowds. On average, open home gardens attracted over 100 people at each event with some homes being visited by over 200.

Promotion of the day occurred in every opportunity. Australian Permaculture Convergence in Cairns Sept 2010; key Permaculture people, groups and business, national Permaculture forums and lists, and numerous individual approaches through emails and telephone calls. The day was promoted through media such as organic gardener, grass roots local papers and media releases. Media releases have gone out to all metropolitan and regional TV, radio and newspapers, plus news agencies and talkback radio, that’s 1,136 emails.

Corporate support was important too. A breakthrough came with “Rova” who offered us a opportunity to promote NPD on taxies throughout the Sydney metropolitan area capturing over 1 million viewings. NPD was also promoted at the Sydney Royal Easter Show and a range of local venues in every LGA of Sydney, Councils, shops, business, notice boards, windows, bus stops, nurseries, poles and posts and many more usual and not so usual places.

A youtube video was also made for the day promoting it across the worlds as next year it is expected the day will become an international event. Social media through facebook and twitter also spread the word like wildfire across networks and the planet.

NPD is a day of collective sharing and celebration. Sharing Pc with the public and helping them develop and live more sustainable lives, celebrating permaculture and our achievements. It’s hard to measure our impacts on people and the planet but I believe it has had deep and far reaching impacts on many people. It did this and much more. Our strategy of gaining maximum media attention by cooperatively focusing all our efforts on one day to promoting Pc widely certainly paid off. The word ‘National’ grabbed the media’s attention more than just local. Of course national media are interested in national projects even through they are happening on a local level. The national-local link was really successful.

One such outcome we didn’t anticipate was how much the day has fostered many more new home gardens. Permies have been encouraged by the day to get on with their place so they can participate in the day themselves. It has raised standards of home gardens and acted as a sort of carrot or initiator. It has speed up the process for people developing their home gardens forcing people to meet the timeline. In Sydney alone this has seen an increase in approximately 20% of new homes. In 2000 when I first got involved in Pc there were few gardens; today, in our region alone, we have over 35 that we know of just from our membership and I’m sure NPD along with the support of PSN through Permablitzes can take credit for this significant achievement.

PSN officially appointed me to coordinate the project in 2011 along with Lauren Pothof as the graphic designer and web master. It was a huge learning experience for us both and a lot of fun for the most. The website was a great success with over 480,000 hits and Lauren did a brilliant job with this. The website is still active and developing with pics, stories, news and events and you can upload as soon as you’re ready. www.permacultureday.org

Thanks goes to many people: Permaculture North for its leadership, bravery and hard work in making it happen by applying for funding managing the project and taking the risks; the federal government for the funding grant; Permaculture Sydney for its support, cooperation and leadership in making this happen in 2009, 2010 and 2011 and supporting and assisting the event and work together to coordinate loads of events throughout the Sydney basin; Josh Byrnes also needs praise and thanks for agreeing to be the Patron of NPD and supporting and promoting it at every opportunity possible. 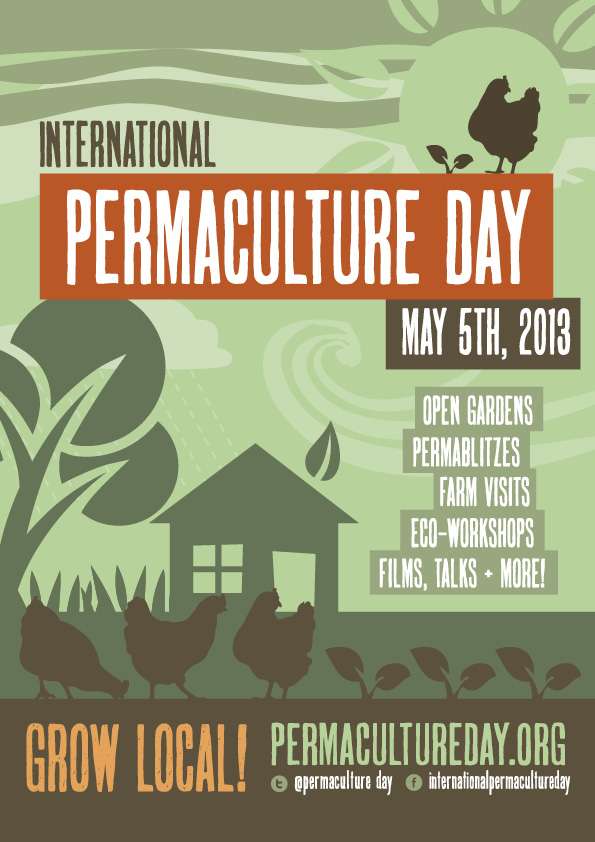 Everyone made this day a success and permies worked hard and fast all over Australia to meet the deadlines and make it happen. Thanks, really goes to everyone involved.

The moral of this story to me is that: Permaculture gatherings such as national, bioregional and State convergences are places where great ideas and action are incubated and therefore important and legitimate; community groups whether local, region or bioregional do make things happen, even national projects; funding and resources help and provide meaningful employment to permies and security and right livelihood above volunteerism; A national coordinated project and a day is successful in capturing the medias attention more than just local; the NPD Project now international achieved many significant outcomes and should be a regular event.

It’s been a pleasure to have been part of this great day and my only hope is that Permies appreciate the benefits it brings and continue its great successes. It sold be a regular agenda item for National and International Permaculture conferences and it would be great to harness funding for a paid regular co-ordinator to assist and really magnify the event.