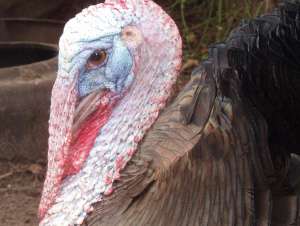 It was very sad to find Chunto had died in his sleep one morning where he went to bed the night before. Chunto was very old. Were not sure how old cause we haven’t had him his whole life, but from all accounts, we expect he was about 10 years. For the past 4 years we had him, Chunto was like my shadow. A constant companion, a great window cleaner and insect eater, watchdog gobbler, show off and flirt with all the ladies. He disliked most men and would frequently chase them up ladders and off the site and many a time we had the Telstra man and tradesmen stranded on our roof or locked in a room waiting for someone to rescue them. He would have to be the most photographed turkey on the planet with all the hundreds of visitors we’ve had here over the years taking loads of pictures of him. Chunto had a big presence here and many of you know him. He was a constant source of entertainment parading up and down the dining room windows displaying himself and his beauty. Lately he took to sitting on my lap and dozing off if I was taking a break and I would pat him. Three weeks ago we bought him a young turkey hen, we named Tootsie, so we could breed from him hoping his nice nature would pass down to his next generation. After four days of ignoring her he quickly became good friends. Tootsie is now sitting on some of the eggs so we hope some might hatch but we are not entirely sure if Chunto was still virile because of his age – so stay tuned to find out the fate of these.